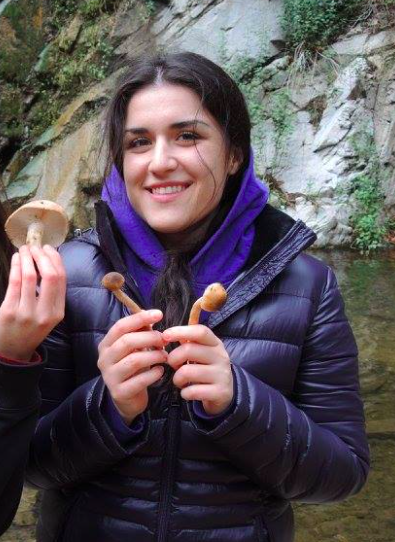 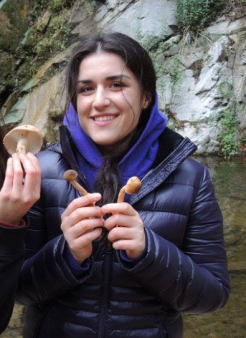 Tania Kurbessoian is a PhD student that grew up in Los Angeles, California.
She is currently doing her research at the University of California-Riverside with
the guidance of her advisor Dr. Jason Stajich.

Tell us about your project!
Currently I am looking into studying fungi in Desert Biocrusts. Biocrusts
(Biological Soil Crusts) are a complex assemblage of different organisms
(cyanobacteria, eukaryotic algae, lichens, bryophytes, bacteria and fungi) that
all work together to survive in that environmental niche. There are biocrusts
found all over the world in many unusual niches but we have chosen to look
into hot desert environments. These desert biocrusts are considered to be the
desert’s “living skin” and many National Parks have started to consider this and
are conserving their diversity by asking visitors to avoid stepping off the trails.
My work looks into a later successional biocrust composed mainly of lichen and
cyanobacteria. This cyanolichen crust main lichen species is a Collema sp.
which helps us identify the crust when we are looking for more specimens. The
general observations for fungi has indicated a variety of resilient Ascomycetes
but also a propensity to harbor black yeasts. I have been working on culture
dependent and culture independent methods of understanding the fungal
diversity of these biocrusts. Using a combination of minimal media and
antibiotics we’ve been able to isolate, grow and store these fungi. We’re hoping
to understand their function and role in the crusts through a myriad of different
metabolomic and flux testing.
Awards you would like to brag about?
I was the 2019 winner of the Emory Simmons Research Award from MSA!
What are your career goals/plans for after you are done with your current
position?
After finishing up my PhD at UC Riverside- I would like to do a post doc at a
NASA facility. I’m very interested in extremophilic organisms and the possibility
of panspermia depositing life forms onto new planets (this being a hypothesis
for how life started on ours).
What is your favorite fungus and why?
I spend some of my time looking for fungi that are really great specimens to dye
fiber with. Fungal dyes only stick to animal fibers and not plant fibers
(cotton/flax). My favorite fungi that I can get a beautiful dye from is Ompahlotus
olivascens, a west coast relative to Ompalotus olearius. When boiling the
fungus with the wool the natural color that comes out is a gorgeous purple, but
while using an iron mordant we can get a variety of different forest/olive
greens. Both green and purple are my favorite colors! Also these fungi are
spooky and glow in the dark.
What is your favorite fact/thing about fungi?
My favorite thing about fungi is that we still really do not know much about
them. I also love how it can bring a variety of different people from different age
ranges to a table and to marvel at their beauty and diversity.
Who is your mycology role model?
A great conservationist, illustrator, and dabbler in mycology my role model is
Beatrix Potter. Her tenacity and love of arts inspires me to believe that
combining the sciences and art is vital to understand the complexities of this
world.
Any great stories from field work?
Didn’t think I needed hiking boots while collecting crust from Joshua Tree
National Park- the cholla cactus proved me wrong.
What do you like to do in your free time? What are your hobbies?
Other than dyeing fibers with mushrooms- I like to use that wool to create fiber
goods, though it has been some time since I’ve dabbled in it. I also enjoy other
crafts such as needlepoint and tatting (not tattoos, a type of lace making) but
also fermented goods like beer, wine, mead and pickled things.
Anything else you’d like to talk about?
I’ve been working on my science Instagram/Twitter which you are all welcome
to follow me along this journey. Instagram: @BlackYeastUnleashed, Twitter
@BYUnleashed