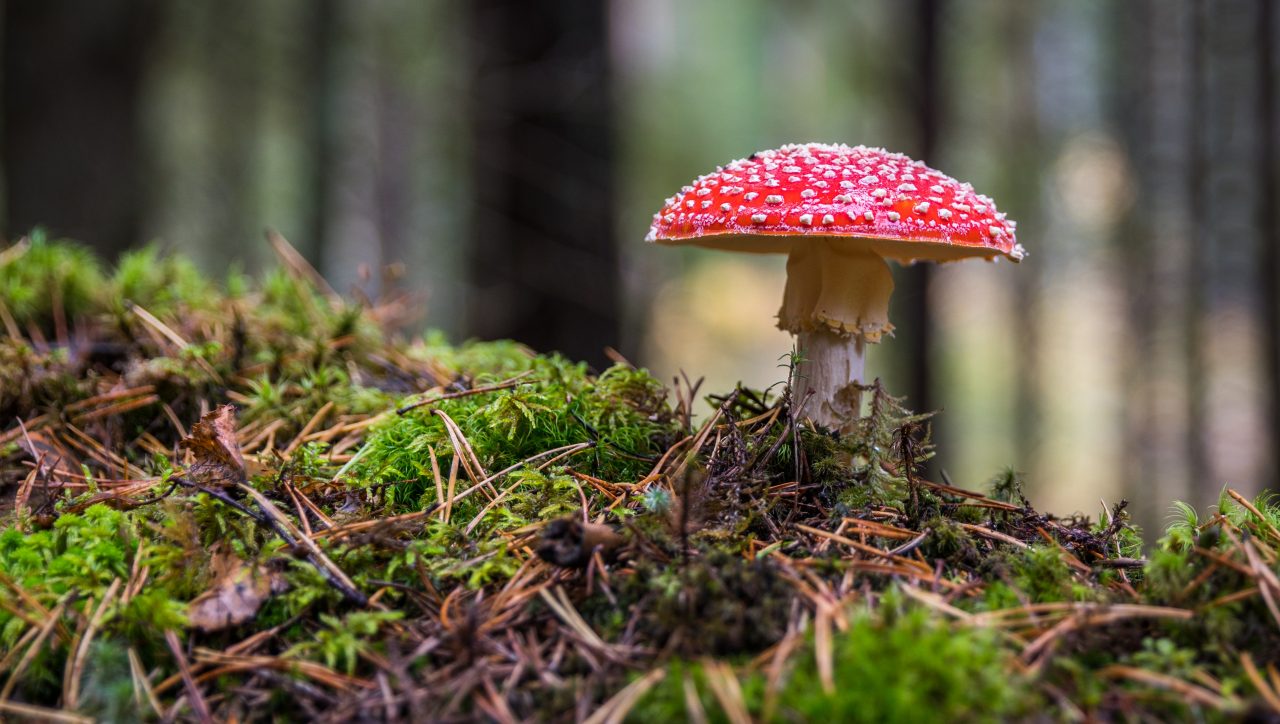 Jorge Ronny Díaz-Valderrama grew up in the small, but historically important city of Cajamarca, Peru, in the Northern Highlands. He is currently a PhD student at Dr. M. Catherine Aime’s lab at the Department of Botany and Plant Pathology, Purdue University. Jorge describes his research as a kind of “enemy-friend” relationship between Moniliophthora roreri and Jorge himself. The fungus made itself an enemy by causing frosty pod rot on cacao, diminishing cacao production in Latin America and threatening world chocolate production, which is definitely something that makes enemies. However, the fungus is also a good friend to Jorge because of its mysterious reproductive biology, which, as he states, has made his scientific curiosity grow. Moniliophthora roreri belongs to the Marasmiaceae, but lacks production of fruiting body; therefore, a better understanding of its population biology and dissemination capabilities within and among cacao plantations are important research questions that Jorge is working on. He is a recipient of a 2013 MSA Mentor Travel Award, 2016 MSA C. T. Rogerson Award, 2017 MSA International Travel Award, and should probably get a vote for the most enthusiastic talk given at MSA 2017.

What are your career goals/plans for after you’re done your PhD?

I would like to hold at a post-doc position to learn techniques that I haven’t been exposed to yet. Then, with all the skills that I acquired as PhD student and will acquire as post-doc, I would like to adventure myself into the Academic life as a Research Faculty to conduct work that has positive impact in Peru and Latin-American.

Academically, I really like Wallemia spp. because it can be found pretty much everywhere, in the air, soil, dust, indoors, outdoors, and it is neither Aspergillus nor Penicillium (jokingly). It is also a very important extremophilic genus of fungi that is commonly found in natural solar salterns and hypersaline waters. However, it can spoil your jam or honey. Watch out!

Socially, my favorite fungus is Saccharomyces cerevisiae, for obvious reasons…

What is your favorite thing about fungi?

It amazes me how complex these seemingly simple organisms can be. They have all kinds of strategies for dissemination, survival and nutrition. It really scares me to think how much we depend upon them. They basically rule the world.

It was already our third day in the world largest city inaccessible by road, Iquitos, which hides in the middle of Peruvian Upper Amazon forest. Even though I was in my home country, almost everything I experienced there was new to me. It really impressed me that the main means of transportation between towns were taxi-like canoes operated by locals and many times helped by the waters of the Amazon and nearby rivers. As usual, our working day started very early in the morning. We aimed to find M. roreri from wild cacao and cacao relatives. Fortunately, we were guided by two experienced plant taxonomists from the “Universidad de la Amazonía Peruana” who knew extremely well the place. After crossing the Itaya River in one of those “taxis”, we had to walk for two hours before we ran into our first diseased cacao trees. At that point we were in the middle of the jungle, but we were so thrilled to find what we were looking for that we wanted to keep on going despite of being exhausted. We found another M. roreri patch and we all agreed it was time to go back. To our surprise, our guides kept walking in the opposite direction from where we started. We were a little worried but we thought “OK, the river is closer this way, so we will probably take a taxi canoe to go back”. Indeed we got into a canoe; however, it was not taking us back but further and further. Our guides wouldn’t tell us where they were taking us. They would only respond with a plain “do not worry” to our kind of desperate inquiries. After one extra hour navigating and 30 extra minutes walking (equivalent to 1.5 hours of anguish) we managed to get to a little house which at its front door had a stack of pineapples on a small table. Our guides, now turned into a sort of kidnappers, yelled at the house hoping for somebody to come out. A lady finally showed up. “Please, can we have four pineapples? Do you have change of ten?”, our guides asked her. We looked at each other and thought to ourselves “Seriously?! Did we just come all the way here to buy pineapples?” Our guides noticed our faces and told us “Don’t worry, it’s on us”, and grinned. We laughed. The lady approved the transaction and handed them a machete. It is going to sound like a cliché but the imposed pineapple slices were amazing, marvelous! “Best pineapples ever!”, they claimed. I guarantee that this statement is too close to complete truth. The entire detour was so worthy. Reach out to me to get exact GPS coordinates of the pineapple house… if ever interested.

The things I do in my free time in order of priority are:

– Hanging out and having a beer with my friends

– Playing and watching soccer (Peru is about to make it to the world cup after 36 years!)

– Listening to music and playing my guitar, not necessarily good music or songs

– Reading a book, not necessarily good ones as well

Every time I have the opportunity to go to Peru, I contact local Universities and Research Institutions to tell them that I will be around and that I would like to give a small lecture/seminar about what I do. In this way, I have given talks at the “Universidad Nacional de Cajamarca”, Jaen; at the “Universidad Nacional de Piura”, Piura; and at the Center for Research and Promotion for Peasantry (CIPCA), Piura. Students and local researchers seem to enjoy my presentations and we still stay in touch. This is priceless to me.

In the USA, I have volunteered to give science (fungal) lectures to Girl Scouts, and I hope they keep inviting me…

Lindsey Becker grew up in North Carolina, where she continues to reside. Lindsey is a Master’s student in Dr. Marc Cubeta’s lab at North Carolina State University where she works on a plant growth promoting fungus in a floriculture system. Lindsey is analyzing foliage area, plant tissue nutrient composition, biomass, and flower counts of Calibrachoa (mini-petunias) in relation to the plant growth promoting fungus Mortierella elongaga, for the link between soil/plant microbiomes and the timing/abundance of flowers. She is finishing up her MS thesis with the pleasant task of counting flowers, and preparing for her PhD. 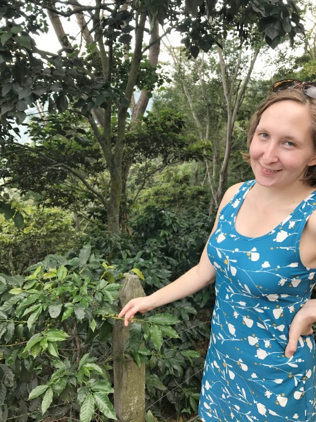 What are your career goals/plans after you’re done your current position?

I would like to work for the USDA ARS as a research scientist specializing in understanding the benefits of plant microbiomes. I’m also very interested in working for biotech companies seeking to exploit fungal endophytes to prevent disease development.

I love Microstoma floccossum (shaggy scarlet cup). It’s hard to spot during a casual walk in the woods and it is very Dr. Seuss-like with its pink cup and white hairs.

What is your favorite fact about fungi?

That the hyphal tip is capable of puncturing gold foil. That is just nuts.

Any great stories from field work?

I used to core dead ash trees in Michigan, and the sound of the tree being cored would start a call-and-response with any sandhill cranes that were nearby. One time in the NC mountains a couple of adorable baby black bear cubs wandered into our research plot about 30 feet away from us. Fortunately, we never encountered mama bear and we were able to shoo away the cubs.

I love to bike, both to commute and for fun. I am never a serious biker because all of my routes are centered around breweries, coffee shops, and bakeries.

Outreach is always a blast- you never know what kind of questions people might have for you about fungi. The last time I volunteered I looked at pictures of someone’s diseased cherry tree and received advice on where to start my own commercial mushroom farm. Kids generally ask the best questions about fungi because they make very few assumptions.

Please contact the Webmaster  (Maria) with any questions or comments at romerojm@oregonstate.edu